It is so easy to give in to anger.

I hold my phone in disbelief, the tweet declaring “Breaking news: shooting in mosque in Quebec” frozen on my screen. My hands are shaking and I feel ever so slightly nauseated, because this is terrible news that comes hard on the heels of earlier news of individuals from seven countries detained at airports and mass protests taking place in response to actions by the new American president.

It would be very, very easy to be consumed by vengeance-fuelled rage at the individual who entered a quiet mosque in my country and killed six people, wounding several others. And this rage – this hate – would do what exactly?

It would feel good, for a moment. Maybe even for a few moments – but allowed unchecked it would do nothing but contribute to the kind of world in which citizens of my own country enter a house of worship and kill people.

I think sometimes in Canada we become a little complacent. That’s because we see ourselves as fundamentally good and gentle people, the vast majority of us immigrants somewhere along our family history, welcoming to those of other countries, faiths and beliefs. And yet if one scratches at the surface – and you don’t need to scratch too hard – you can find the dark shadows of bigotry, racism and religious intolerance.

Oh, we defend it, to try to make it seem we are just “protecting our Canadian way of life” (which of course has changed several times as new residents joined our country, as we moved from predominantly rural to urban, from largely agriculture-based to industry). Or we find myriad other ways to pretend that we are not distrustful, not intolerant and not being driven by hate.

Yes, hate. It seems so un-Canadian to discuss hatred, to say we are far more affected by it than we care to admit, but perhaps it is time to acknowledge the truth. We are not pristine in our treatment of others, and we are not immune to the path hate makes for us.

A path that this week ended in a mosque in Quebec.

I am old enough to recall another shooting in Quebec, this one ending in several dead women and at the heart of it a man who hated women. At that point in time I don’t think we thought of ourselves as a country that had men in it who hated women with enough vehemence to carry a gun into a college, but when it happened we suddenly woke up and realized that perhaps misogyny had deeper roots in Canada than we realized. As a young Canadian woman, that shooting changed my life.

As we begin to learn about the suspect in this shooting, I think we may come to realize some disturbing things about our country. We will learn about the roots of homegrown terrorism – because that is what this act was – and about the hatred that exists in our own nation.

For those who have been complacent or casting stones at our neighbour to the south, we must instead look at our own fragile glass house, freshly shattered panes and all. We must recognize we are not immune to anger, we are not safe from violence and we too can forge a path founded on hatred.

And that is perhaps the hard part. We cannot give in to the hatred, and we cannot act out in our anger and sorrow; instead we must come together to support, embrace, encourage and love those who are the victims of this hatred and violence. We must acknowledge the flaws in our own country, and we must, each and every one of us, ensure that our words and actions do not contribute to hatred, anger and violence.

We must move forward in the spirit of respect, dignity, kindness and acceptance of all those who share this incredible, amazing and beautiful country founded on the diversity of its residents.

And we can do this, every single one of us. A few decades ago, in another dark and troubling time, a young woman wrote in her diary: “Look at how a single candle can both defy and define the darkness.”

We must be the candle, my friends, and we must both defy and define the darkness that could so easily come to rest within us. And by so doing, we can be the beacon of light that ensures hatred will never, ever win. 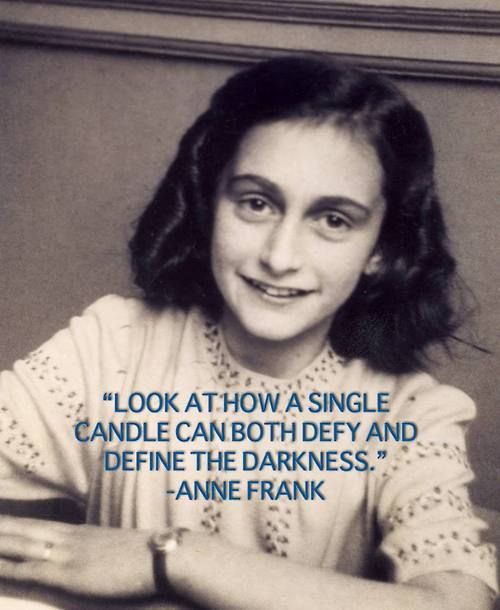