I actually didn’t entirely know what to expect.

In fact, I haven’t given drag much thought in my life except after my daughter came home from University for Christmas break. She said: “I need to show you what I’ve been watching to relieve stress during exams”.

And that’s when she introduced me to RuPaul’s Drag Race.

It took exactly one episode to get me hooked. Yes, it was about the glamour and the drama and the drag queens, but it was also about much more than that. It was about a group of men who have experienced tremendous discrimination in their lives based on a variety of factors, from their sexual orientation, to the color of their skin, to the fact that they chose to dress up as women and perform on the stage.

One of the things I have always taught my child is that despite our differences as people, we are all so very much the same. The things that make us different should be celebrated, because they are the things that give life flavour and make being alive interesting; how dull the world would be if we were all exactly the same.

I am happy to say that my daughter has embraced this, and in fact has taken it so much further. As some know, when she was in Grade 10, she cofounded the region’s first GSA. The GSA – or gay straight alliance – was formed to ensure that all kids in her school felt welcome and safe, no matter their sexual orientation or how they identified. She was passionate about the cause, because she felt keenly that not all kids feel safe in our community, and she wanted to address this inequity.

Last night I had the opportunity to attend the Oil Royals Amateur Hour Drag Show. When show co-host Billi Gold welcomed us to the show, “he” commented on how this was a positive, safe space.

And when he did, I thought about how the term “safe space” has somehow become an insult in our world. You often see comments online telling people to retreat back to their “safe space”, as if this is some tremendous insult when truly nothing could be further from the truth.

After all, as humans we have struggled for thousands and thousands of years to establish safe spaces. In a world in which we have always been vulnerable, whether to other people, other species, or the weather, we have built structures, built entire communities, and found ways to make ourselves safe. And yet somehow when we suggest that work still remains to establish “safe spaces” for all, there are some who seem to think that somehow this threatens them and choose to use this term in a derogatory way.

My daughter and the flag I brought her to hang in her university residence; the flag was originally on display at the Pride YMM event in Fort McMurray.

One of the reasons my daughter formed a GSA is because she felt a lack of safe spaces in our community for people who identify as LGBTQ. Things have come a long way in our community in just the three years since then. Pride YMM celebrated their first event last summer, a rainbow sidewalk celebrating diversity has been painted (although this sadly attracted some controversy) and there has been a sudden surge of positive and supportive events taking place in our region, including last night’s drag show.

Last night wasn’t really about how anyone identifies or sexual orientation; it was about men and women dressing up as the opposite gender and performing on the stage to an appreciative and supportive audience. It was a place where everyone felt not only accepted, but welcomed.

And perhaps at the end of the day that is what a safe, positive space, or a safe positive, community is about. It isn’t really about acceptance, because that implies that we are “tolerating” or “accepting” something that isn’t the norm. Perhaps it is more about not only welcoming but celebrating our differences, and focusing not on those differences but rather on what makes us alike.

Last night as I watched all of the performers I thought about how I wished this had existed when my daughter had grown up here. Maybe she would have felt there was a supportive, positive place in this community where everyone could simply be who they are without judgment and without fear.

Because this is what I want for my community and where our children will grow up. I want them to know that their community welcomes them, embraces them and celebrates them. Not “regardless” of anything, not “despite” anything but just because they are our children and they are perfect just as they are and who they are.

Last night it was a pure pleasure to sit in a room filled with fellow community members who knew the value and need for positive, safe spaces for every single person. There were moments of laughter – a lot of laughter – and there were moments when I couldn’t help but reflect on how far this community has come in the 18 years I’ve lived here and yet how far we can still go.

My sincere thanks go to the Oil Royals for creating this event, which I know took so much work, and to all those who attended and celebrated diversity in our community. I sincerely look forward to the next drag show and the upcoming Pride YMM events as we continue develop positive – and yes, unapologetically safe – spaces in our community for everyone who calls this home. 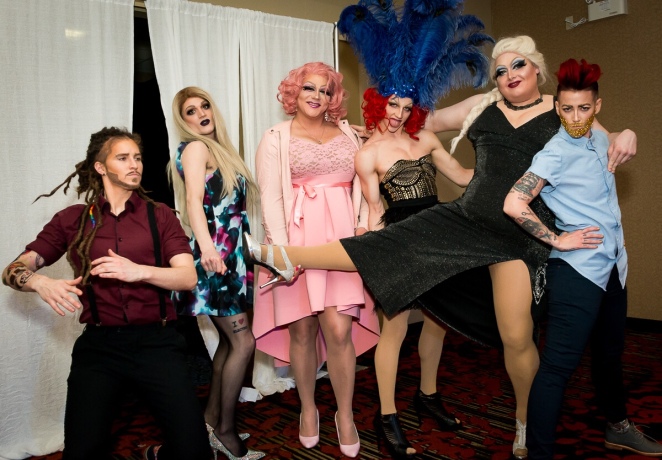 One thought on “What A Drag…Show”